Development of a small Scots Pine

This Scots Pine (Sylvesris) was collected in 2005 from a planted forest in Suffolk. Quite boring in shape but I was atracted by the bark quality on such a small Pine. The foliage was reduced on collection. After a period of a year or so, some work was done to introduce some movement in the top third of the tree. The remaining foliage was allowed to grow and was then pruned to build on side branching and back budding. 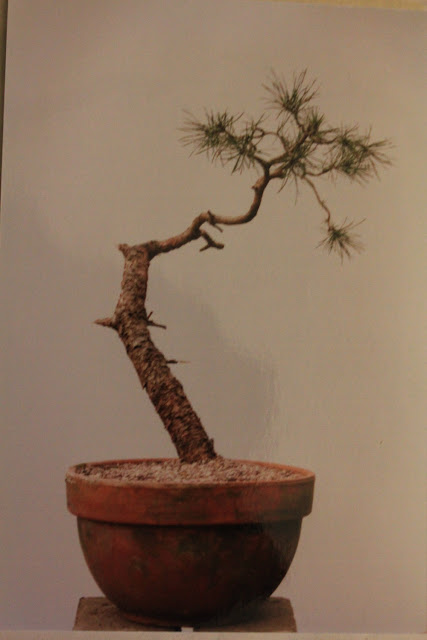 The Pine some 4 years down the road. Some wiring had been done in that time but only on the trunk line and first branch. The intention with this first branch was to create a dead branch with it. Dead branches or Jin, can be made more convincing if planned in the long term. By wiring and styling the branch, some very interesting character can be introduced, as well as side branching. Jins made without prior planning tend to be straight or slightly curved and very boring. You can also see a shari down the trunk where the tree was reduced after collecting. The callous has rolled over nicely now and gives a feeling of age too. 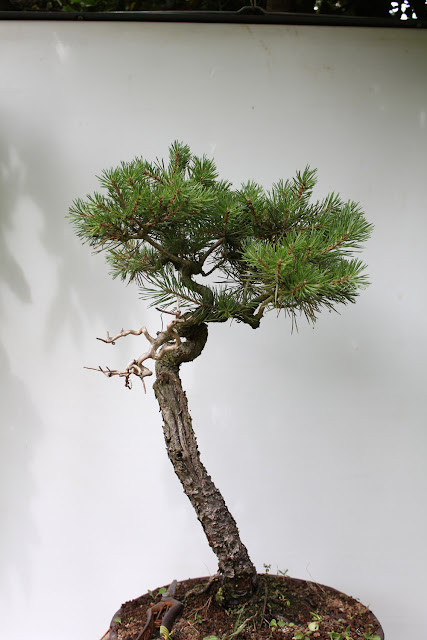 The Pine now needle pruned to let light into the interior and give better definition when styling. The whole tree was then fully wired so that every branch and candle could be placed exactly where I wanted them. 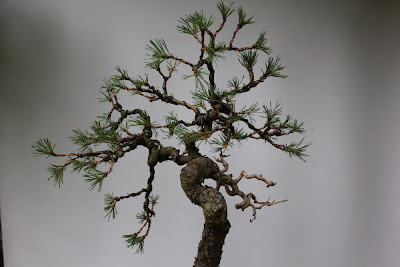 The wiring and styling complete, I am happy with this trees first design. I want to create a more natural Pine style in the long run. Most of the branches are assending at this stage, rather than the usual downward curve. 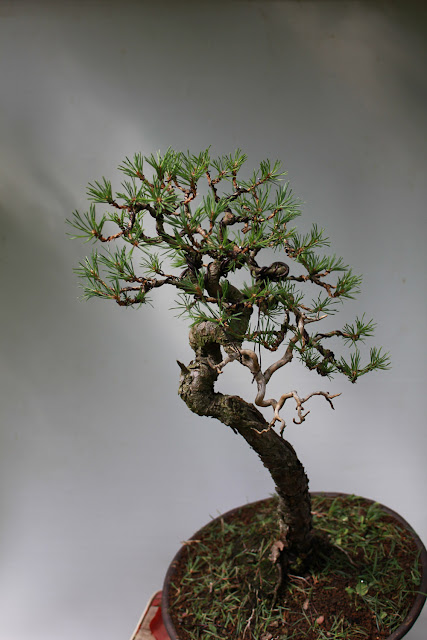 A sketch I made to show how this tree might develop in the future. A lovely specie to work with. 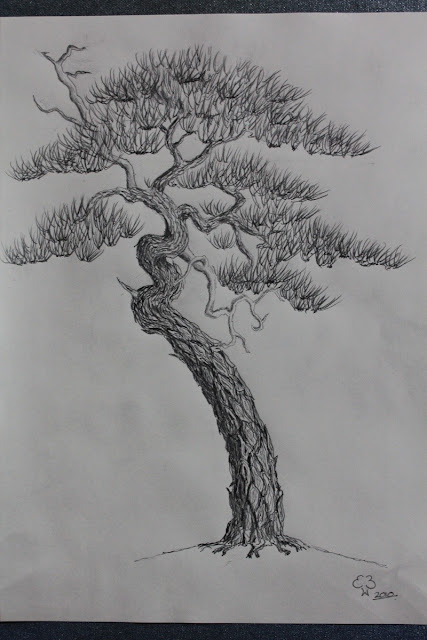 Posted by Wildwoodbonsai at 7:09 PM No comments:

Development of an English Elm.

This English Elm was collected in 1999, from a hedge on a building site. The photo was taken 2 years after collection and at this stage the right side of the tree was dying off. On inspection, I discovered most of the roots had been eaten by Vine Weevils. That Winter, I removed the dead bark to discover 2 tiny roots and a 1 inch (25mm) live vein. The deadwood was a bit dull and lacking in character, so I decided to machine carve and refine the detail with a Scalpel. The work took about 5 hours to complete. 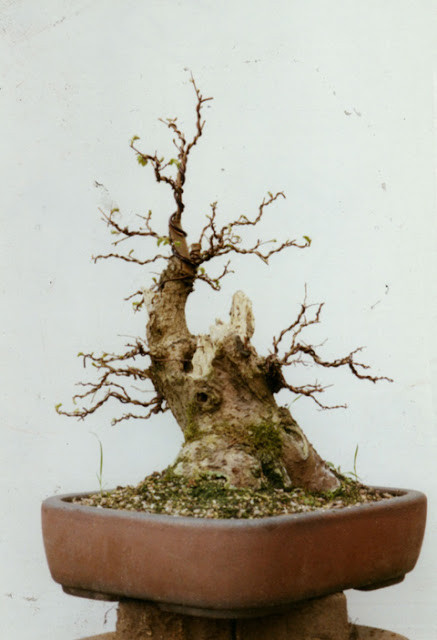 The deadwood pictured a couple of years after completion. The lateral cracks add to the illusion of age. 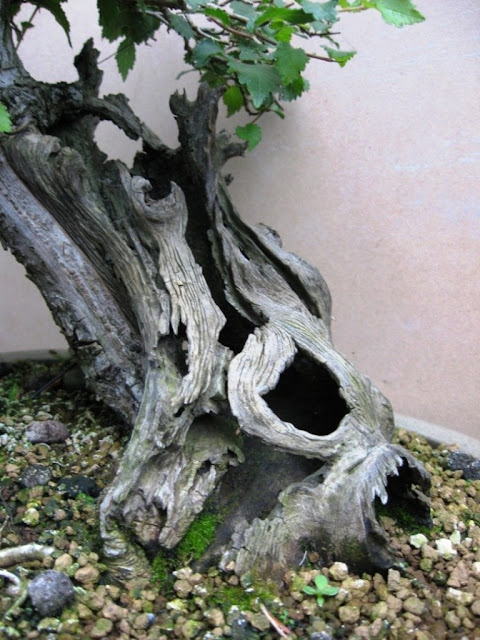 A closer picture of the deadwood, showing the graining hand carved with a Scalpel. All the deadwood has been treated with wet rot wood hardener to help preserve the more delicate deciduous hardwood. 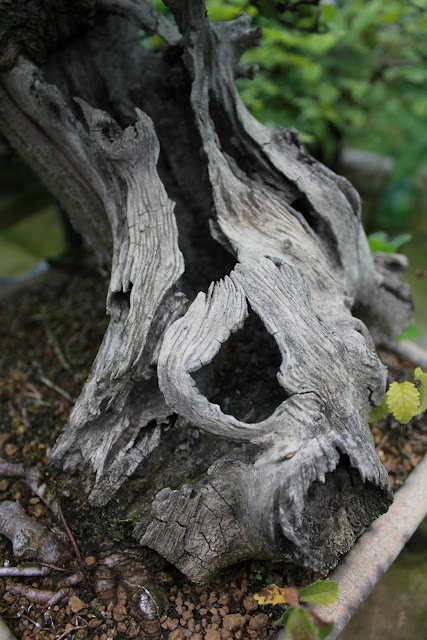 This photo was taken in 2006, just after I commisioned a pot from Gordon Duffett. His pots give an antique appearance and the glaze colours reflect in the deadwood and bark 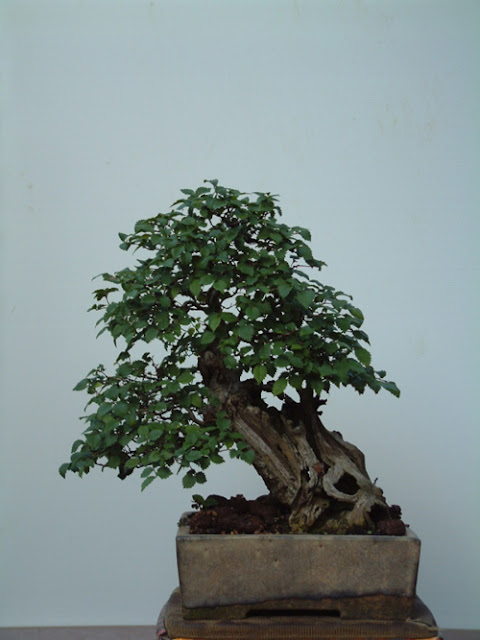 This picture was taken in January 2011 at the Noelanders Trophy.
The table was made by Peter Sandford
petersandford47@yahoo.com
The accent pot is one of my own and planted with Polypody, Lichens and Moss. 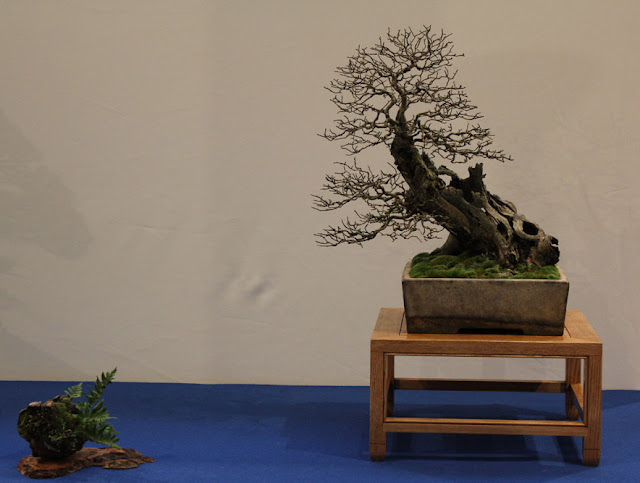 May 2011.After daily feeding with Miracle gro, the shoots have extended massively. Time to remove all the leaves. 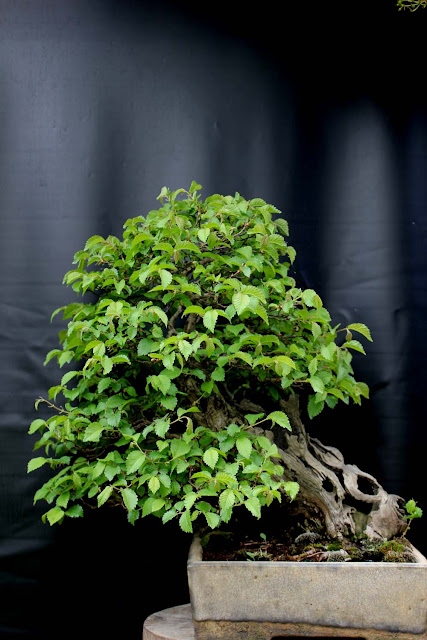 The only leaves left are the weaker and inner ones. I will carry on feeding strongly through to Autumn. 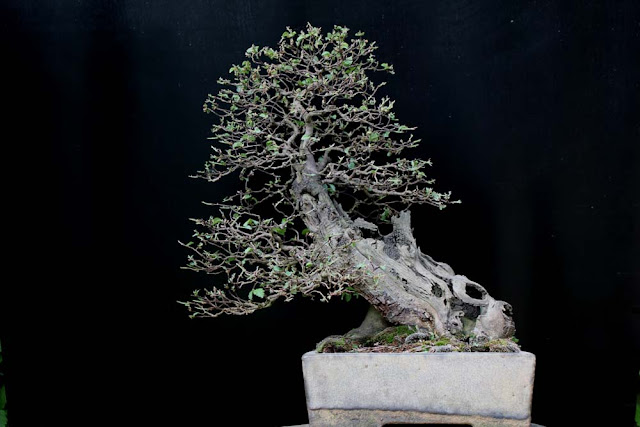 Back in leaf and looking healthy. June 2011 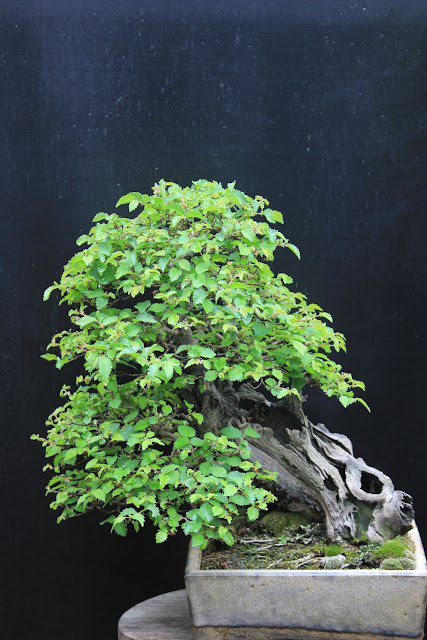 I treat the deadwood twice a year with a wood hardener 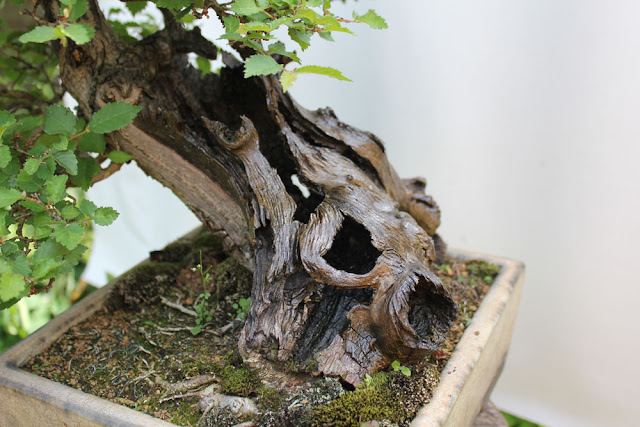 As you can see, it is quite shiny to start with but weathers down in a couple of weeks 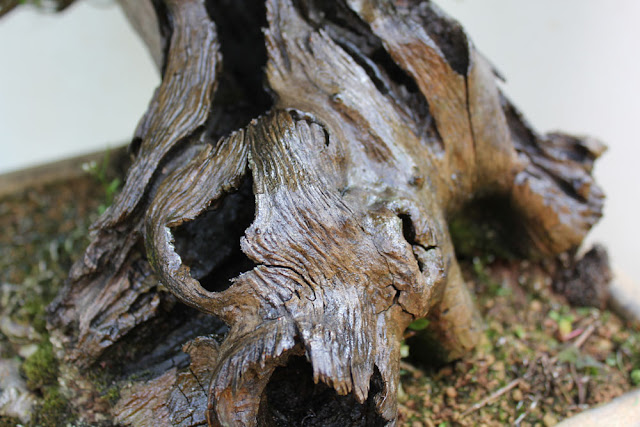 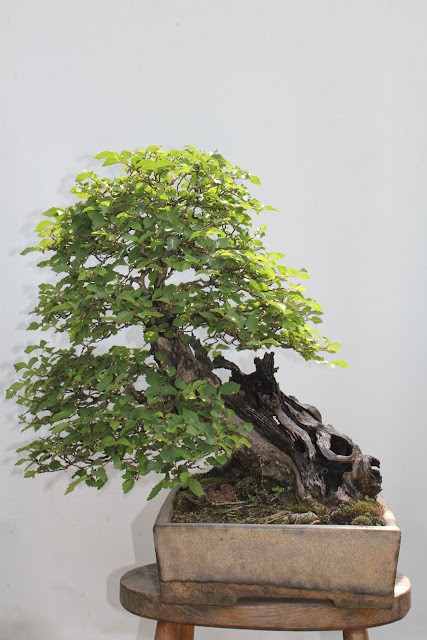 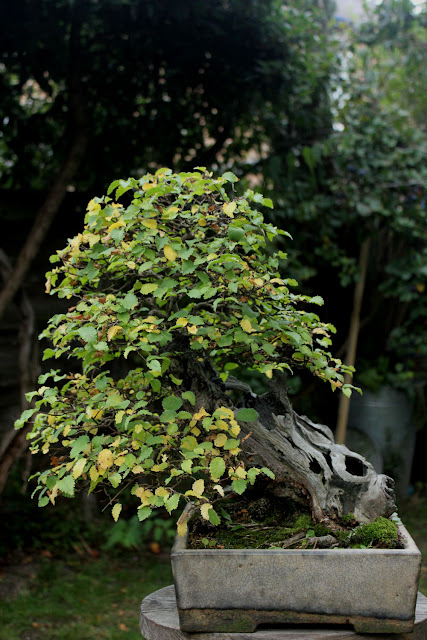 End of Feb 2012. Update before the leaves go and spoil it all. Necessary evil I think. 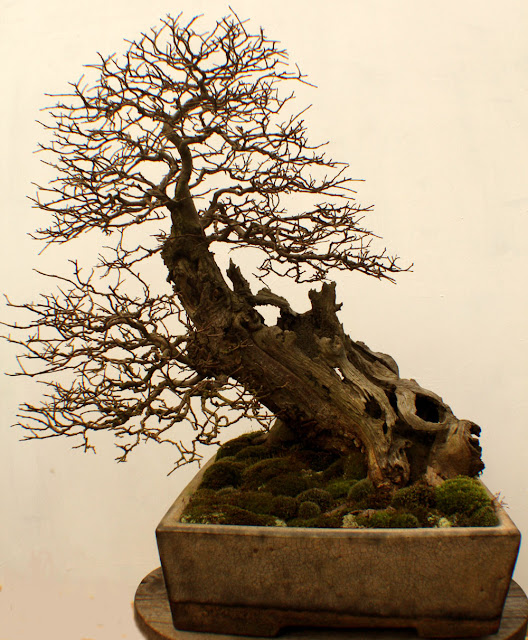 More unusual view of the deadwood. 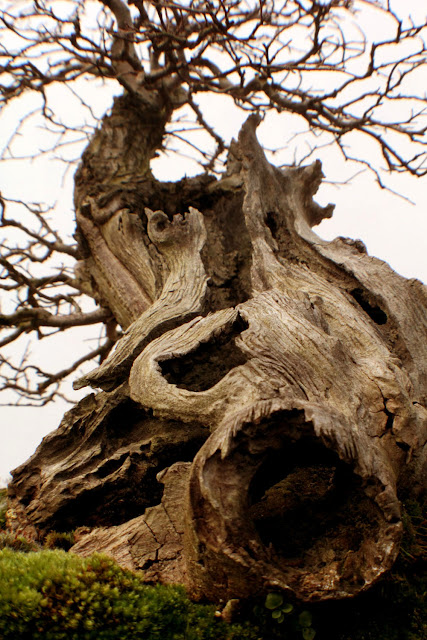 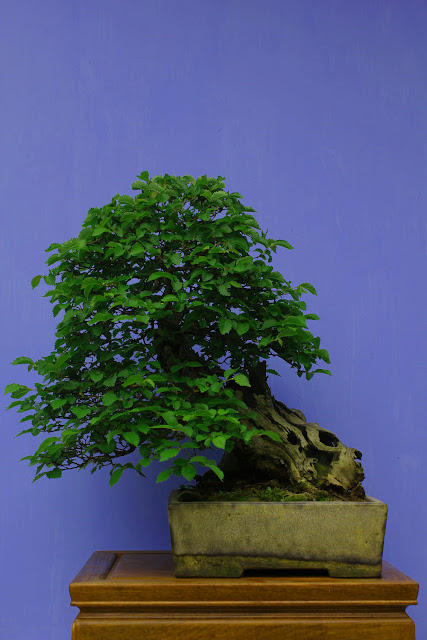 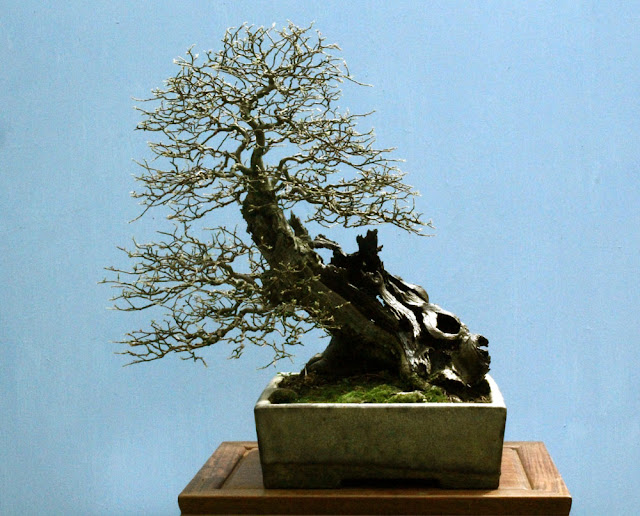 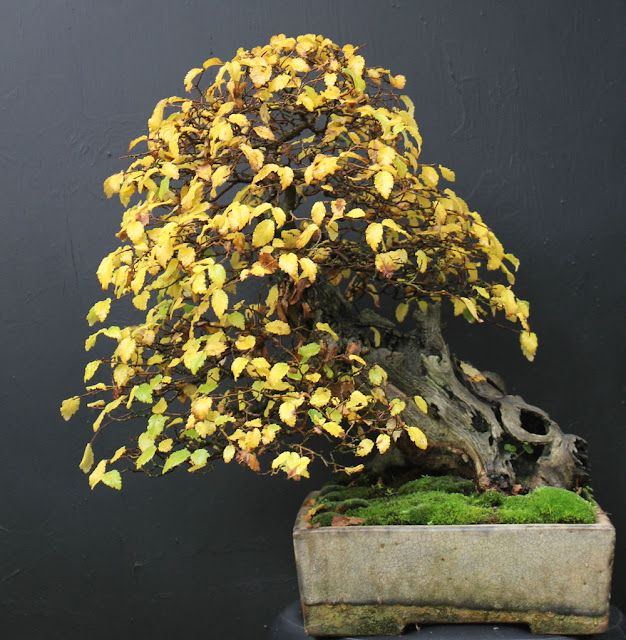 
Some stills taken at the same time. 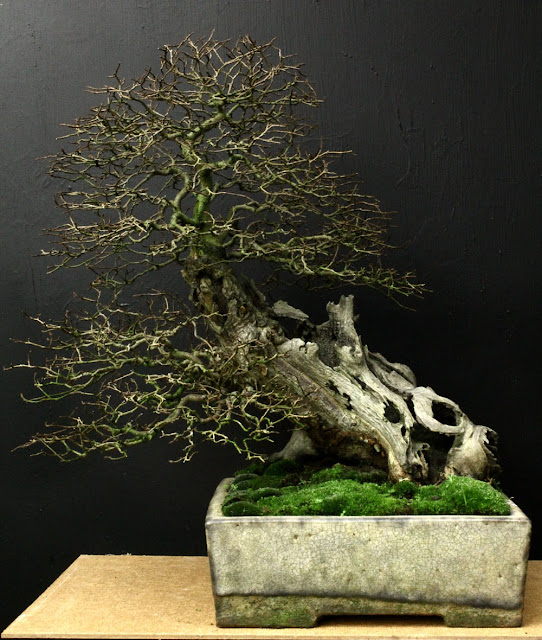 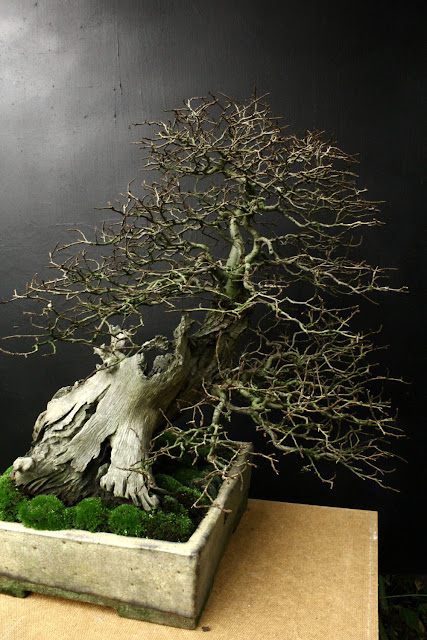 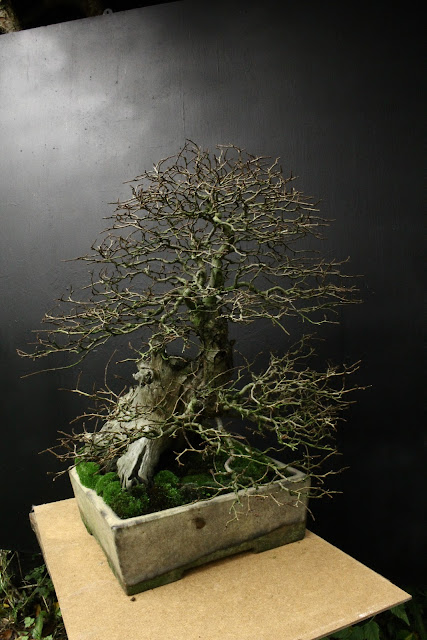 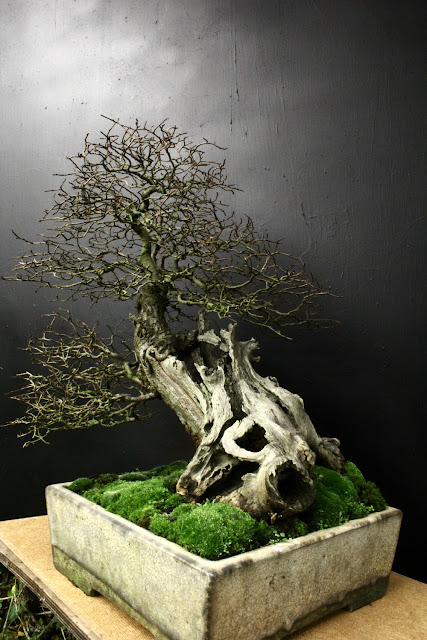 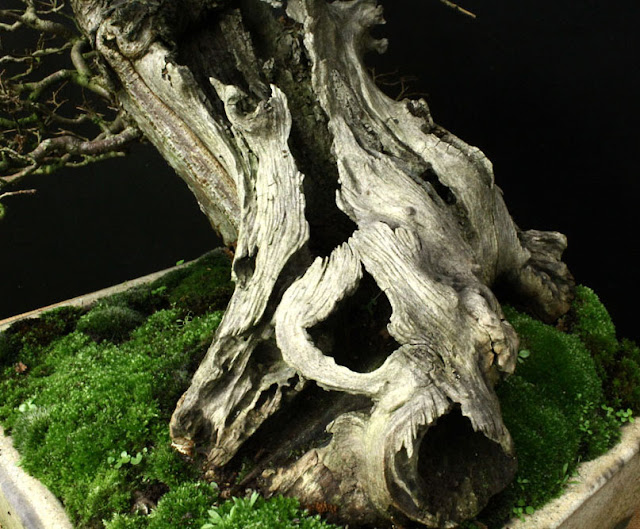 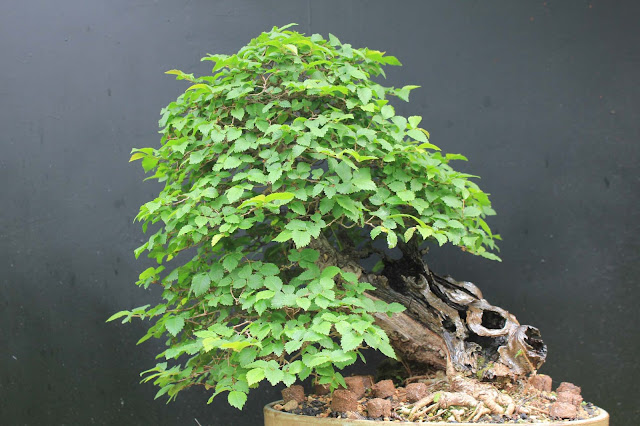 One more year in this pot should do it. I have pruned back quite a lot this year so should see some good back budding hopefully. I will be trying a new product on the deadwood this year and will post my findings later. The tree seems to have tipped over in this pot so that is why it is at a funny angle. 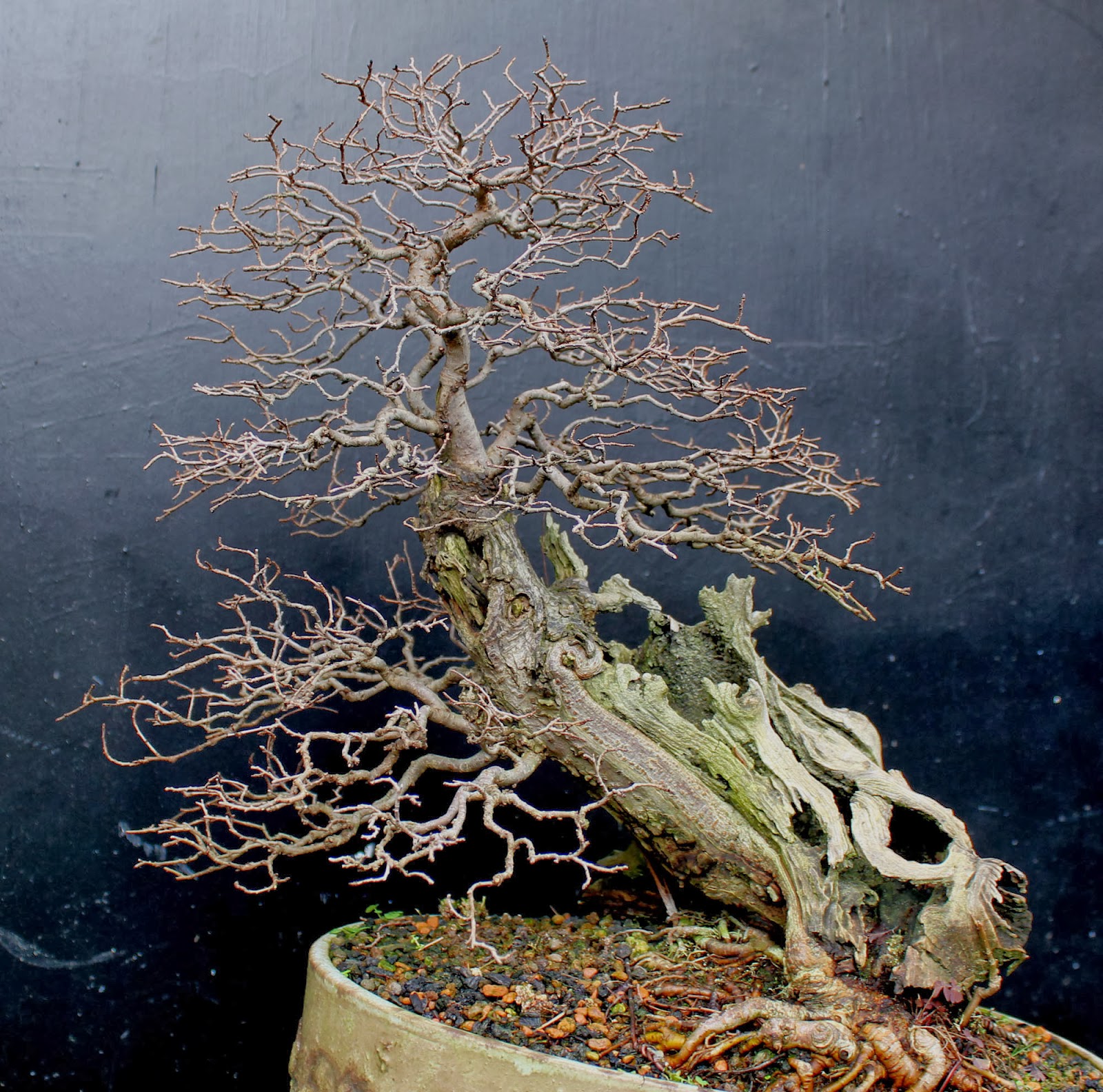 Posted by Wildwoodbonsai at 7:07 AM 5 comments: